Our large travel crew just wrapped up a week spent between Prague and Budapest (with a bit of Regensburg and Pilsen sprinkled in) and I think it would be impossible to find much to dislike in either location. Both cities offer an abundance of beauty and history, although Prague puts it all out there and Budapest makes you work for it.

We were driven from Munich to Prague by a car service I would recommend called DayTrip that provides transport with the addition of site-seeing stops along the route, and English speaking guides/drivers. We stopped in Regensburg in Germany, a small medieval village that was declared a UNESCO World Heritage site in 2014 and Pilsen, Czech Republic, where Pilsner beer was created. In both places we sampled the local specialty, enjoying sausages and sweet sauerkraut at the Historische Wurstküche zu Regensburg and sampling Pilsner beer and Becherovka. We only had an hour in each spot, but both towns are quite small and we didn’t feel rushed. Regensburg was more spread out but the town square in Pilsen is breathtaking and offers a lot without having to move around.

This was found in Regensburg 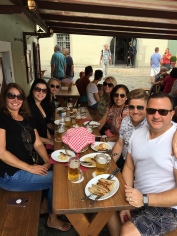 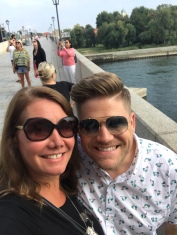 Regensburg
We finally arrived at our apartment in Prague and found our way to dinner at one of our favorite places, U Tri Ruzi for hearty Czech food and beer brewed on location. After dinner we walked around the corner to the Old Town Square to see the spectacular church, Our Lady before Tyn, before calling it a night. We arrived back at our apartment to learn that the AC was not functioning and our apartment was 85 degrees. Joey took charge and had a repairman within the hour and soon we were cooled down and ready to sleep. 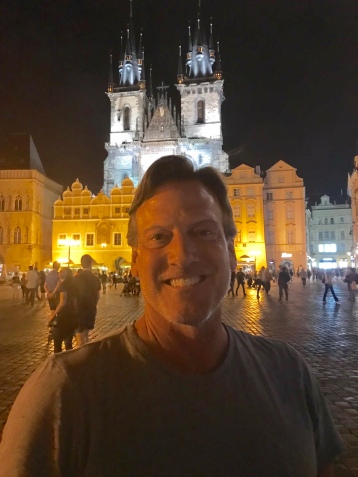 Our Lady before Tyne
We were up early to sightsee and meet up with Tony and Julie who arrived a few hours earlier. We decided to cross the Charles Bridge and have a bite in Mala Strana. Being August it was not only crowded with summer tourists, but it was also unbearably hot. As mentioned in a previous post, we were there during a miserable heatwave that was crushing Europe. We sweated our way across the bridge, barely stopping to notice the monuments or riverside because of the blazing sun and heat. As soon as we were across we sought shelter at Kampa Park, a lovely riverside restaurant, where we rehydrated with cold wine and snacks, and sucked up all the coolness coming off the misting fans.

It was hard to pull ourselves away from that shady, cool spot, but we only had 1.5 days left in Prague and we wanted to make the most of it. We split in to three groups with one group going shopping, Dave and Tony headed off to a bar, and me and the two Julie’s off to Prague Castle. We learned how to use the tram which saved us a lot of walking. The castle buildings were closed due to the later hour, but we walked around the complex checking out the ancient structures, Golden Lane and the torture chamber. We walked down to the bottom of the hill and boarded the tram back to the apartment to relax and cool down. 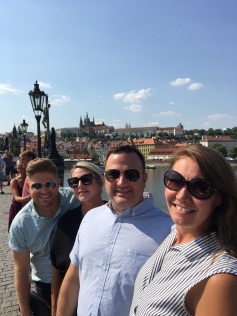 Crossing the Charles Bridge…smiling in spite of the heat 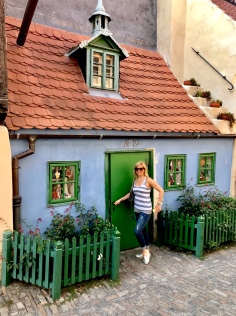 Prague Castle complex
The next day it seemed everyone had hit a wall and wasn’t in a huge hurry to leave the apartment. We watched movies, did laundry and chilled out until around 4PM when hunger pulled us off the couch. Some of the gang was already out shopping and sightseeing in the Jewish quarter, so the rest of us went to a café for pizza and beers since we had a few hours before dinner. We met up at a beautiful restaurant called Bellevue and had an incredibly special meal. Apparently some “YouTube stars” were also eating at the restaurant, and we were greatly entertained by their outfits and excessive posing and selfies. Good times. After dinner we took an evening walk across the Charles Bridge; it’s spectacular at night. 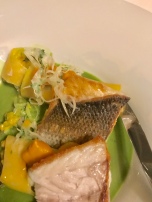 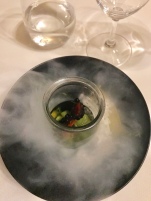 Evening walk across the Charles Bridge
The next morning we headed to the airport for our flight to Budapest. We were flying on a tiny prop plane operated by Czech Airlines and everyone was very happy to be back on the ground in Budapest. Unfortunately the size of the plane forced us to check our carry-on bags and Sean’s bag did not make the journey. Joey jumped in to action and spent the better part of two days trying to track down Sean’s bag. It was pretty shocking how little help the airline was; they literally had no information. American Express was able to track down the bag after two days of calls and at last Sean and his clothes were reunited.

As we set out to explore a new city, I noticed Budapest is considerably grittier than Prague. Prague just slaps you in the face with charm and beauty everywhere you look, whereas Budapest’s beauty is tucked around corners and scattered about. It’s there, you just have to look for it. Our first day we mostly spent exploring Pest, which is the party side of the city and where the trendy shops and restaurants are. We walked along Vaci utca and ate Hungarian goulash, we went to the river and ogled the Parliament building, and we explored the very lively Kazincsky utca and its most famous ruin bar, Szimpla Kert. It was packed (and hot), but the vibe was very fun with a wide range of age groups. We ended the night having cocktails on a floating restaurant / bar called Spoon. 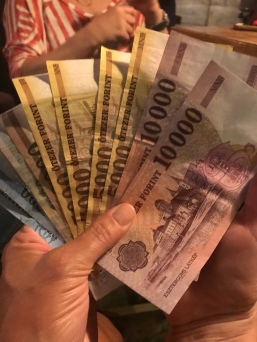 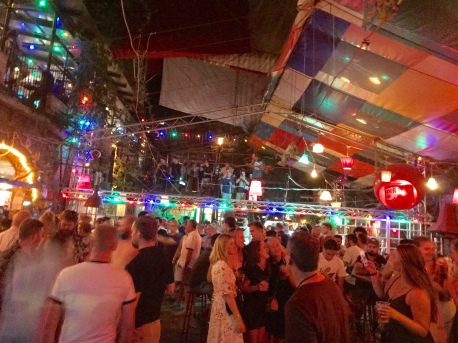 Ruin Bars of Budapest
The next morning we did more sightseeing around Pest and a group gathered together to check out the Gellert baths. Dave and I had tired feet and opted to head back to our apartment to rest up before dinner. In hindsight, it sounds like we did the right thing… the report from the group was that the baths were nothing more than large public swimming pools and maybe lacking a bit in sanitation. I think the term, “grey murky sludge” was used to describe one pool. We thank them for taking one for the team! We had a good dinner at Mazel Tov although the service was a little spotty and Dave was informed they were out of his entrée when they served everyone else their food, which was really odd.

The next day half of the group rented scooters for a few hours and the other half decided to walk to Buda and take the funicular to Castle Hill. It was a national holiday in Budapest so lots of streets were closed to car traffic making it easier to get around, however, there were also tons of festivals happening and they brought a lot of crowds. Have I mentioned it was hot?? We walked what seemed like hours to get to the funicular only to find super long lines that were moving slowly. So we decided to walk up until we realized there was a festival happening up top and we had to buy tickets. At this point we scrapped Castle Hill and found an air conditioned hotel bar and just rested our feet and cooled off. We walked back to Pest across the chain bridge and while Julie and Tony went in search of the Shoes on the Danube, Dave and I camped out at the Four Seasons. We grabbed dinner at Buddha Bar and called it an early night since the majority of the crew was leaving early the next day.

Shoes on the Danube

The baths…note the happy faces! 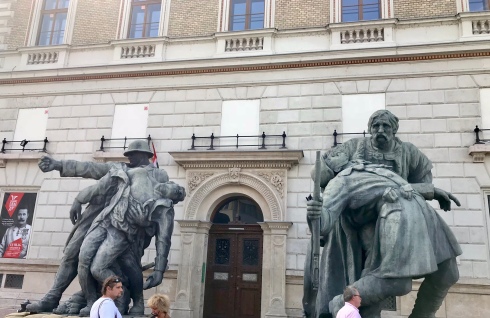 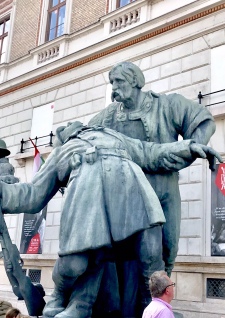 After the majority of the gang left, Tony, Julie, Dave and I made a second attempt at Castle Hill, this time succeeding. I found this part of Buda to be enchanting and the most beautiful part of the city we’d seen thus far. Here you will find a fairytale village of cobbled lanes, charming houses, the impressive Matthias Church and Fisherman’s Bastion. From this vantage point you can see the Danube and get an incredible view of the Parliament building. We took our time wandering through this part of town, making our way to the cultural center and the remnants of Buda castle. The walk back to Pest was easy and we stopped at the Raqpard Bar along the river’s edge for a cold Frose. We ended our night with a delicious meal at a Lebanese restaurant called Baalbek, that I would recommend. 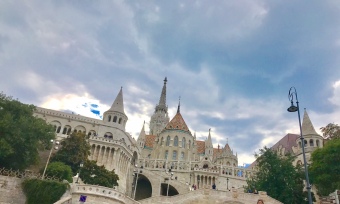 Dave and I were on our own for our last day in Budapest, and decided to head towards Hero’s Square to see what that was about. It was a long walk from our apartment, but the square and adjoining park Varosliget was a just reward. This green space is lush, with large, mature trees, a lake, a bathhouse and a castle. As we walked the park trails we happened upon a café that was playing Madonna and serving cold beers. The castle, although not old, is a real stunner that provides a lot of photo ops. We made our way home on Budapest’s metro, which was clean and efficient – we were scolding ourselves for not using it sooner. 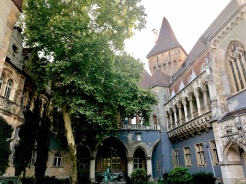 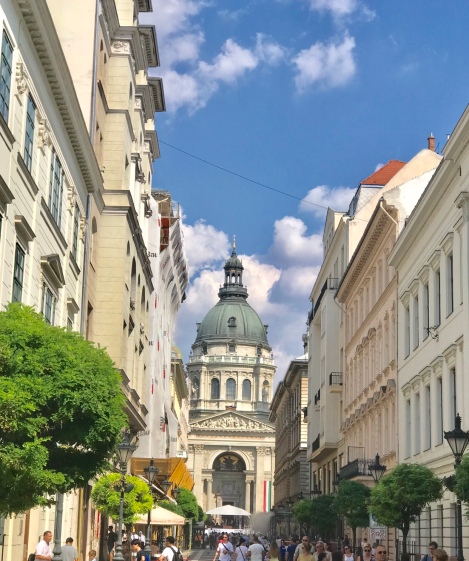 We very much enjoyed these two Bohemian cities and appreciated all they have to offer. Prague with its blatant gorgeousness and Budapest’s scruffier version; once we found Budapest’s beauty it was easy to see it everywhere.

Up Next: The Netherlands!