When we were planning our 10-day trip through Ireland and Northern Ireland, we had more than a few friends and family suggest that was too much time on the island and we’d be bored after four or five days. We didn’t really have a choice – due to our Visa limitations in the EU, we needed to spend as much time in the UK as possible.
Our 10-day itinerary included two travel days, so in actuality, we really only had eight full days to explore. We spent the first five days driving through Ireland, sightseeing along the way, and spending each night in a different town. The last five days we anchored ourselves at an Airbnb in Belfast and took a few daytrips and explored Belfast.

Our 8-Day Itinerary:
Day 1: Started at approximately 10:00 AM driving from Wexford to Cork for lunch. We walked about the pedestrian area a bit, which is predominately shopping and chain stores. There are plenty of restaurant and pub options for lunch. At one pub a friendly bartender suggested the English Market which we enjoyed very much. We also had a pleasant pint at The Mutton Lane Inn which is down a little alley and lit by candles – very atmospheric. Cork was a bit urbanized for our liking, but we didn’t have much time to explore. 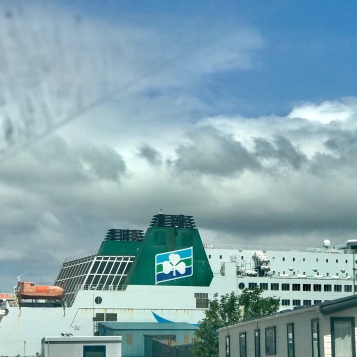 Taking the ferry from Pembroke , Wales to Rosslare, Ireland

The English Market in Cork 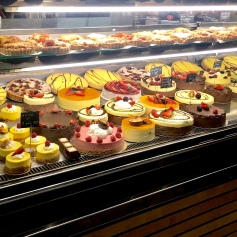 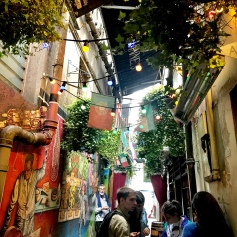 Alley to the Mutton Lane Inn

The Mutton Lane Inn
Arrived in Killarney for the night staying at the Scotts Hotel. The hotel has a free parking garage, a large restaurant and bar, and we had a big guestroom with a balcony. We walked about Killarney, which is bustling and lively, but not overly crowded. We ducked in to the Speakeasy pub for a pint and waited out a downpour. The locals were friendly and welcoming. Once the rain died down we walked to Cronins for a late dinner of cottage pie and chicken curry. We enjoyed Killarney and would recommend it for a day or two.

Chicken Curry at Cronins
Day 2: Started out on our Ring of Kerry drive, which should have taken us through Killarney National Park, and is the route I plugged in to the GPS. However, Google maps re-routed us around the park, and by the time we realized it, we were already close to Kenmare (too late to turn around). So, our Ring of Kerry drive started in Kenmare! We stopped here for a light lunch of chowder and took a walk around the town. Kenmare is a great small town with lots of shops, pubs, and restaurants. It’s on the Ring of Kerry coach/tour bus route so it can be crowded, but definitely should not be skipped.

After leaving Kenmare we took the beautiful, scenic drive clockwise around the coast with stops at Blackwater Bridge, Sneem, Castlecove, Caherdaniel, and Glenbeigh. We decided to stop for the night in Dingle but made a pitstop in Tralee to visit the Rose of Tralee Rose Garden. One of my closest friends represented Washington D.C. in the competition back in 1993 and we were intent on getting a picture of her name on the plaque. We spent the night at the Dingle Skellig Hotel. 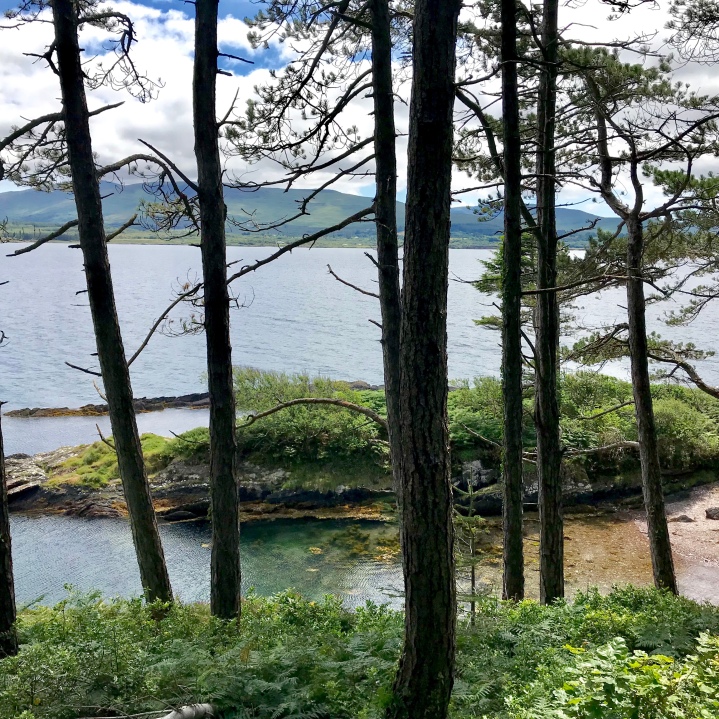 Saw a little pulloff near Blackwater Bridge and followed the path down to this site! 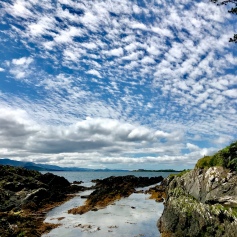 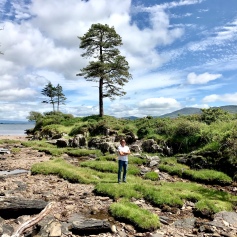 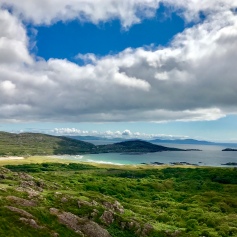 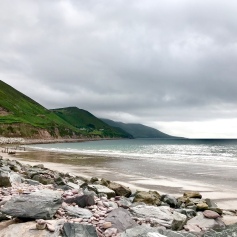 Day 3: We drove the Dingle Peninsula and headed north to Galway, stopping at the Cliffs of Moher. It costs £16 per person to park at the Cliffs and gain access to the visitor’s center. If you’re brave, you can park on the road for free and walk along the cliffs outside of the official area, but be forewarned there are no barriers on this section of the cliffs and it’s very dangerous.

After the obligatory selfies from the Cliff, we continued our drive to Galway and checked in to the Hotel Meyric. Galway is a lively university town, and there is plenty of action at The Docks along the High Street near Cross Street Upper. We ate at the Pie Maker and had some great, flaky pies (steak for him, chicken for me). Although the restaurant is compact, we were seated right away. After dinner we just walked up and down the streets, people-watching, admiring the street art, and avoiding the attention of the street performers. On our way back to our hotel we walked through Eyre Square and enjoyed the buskers. We had a nightcap at Garvey’s Inn, which has a stunning bar area in the back, and a live band was setting up during our visit. 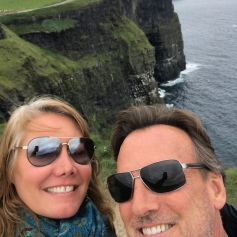 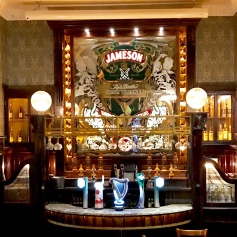 Day 4: We left Galway in the morning and took a leisurely drive to Dublin, stopping at Tullamore for a whisky tasting, and a few pictures at the Charleville Castle. We might have stayed for a tour, which are offered (for a fee) on the hour, but we had a dinner reservation at 6:00 PM and didn’t have the extra time.

We arrived in Dublin around 4:00 PM at the Clontarf Castle Hotel, which is about 6 miles from town. Since it was my birthday and an anniversary, we splurged on a stay in the castle and dinner at its upscale restaurant, Fahrenheit. The meal was quite good and the atmosphere of the castle dining room made the occasion extra special. 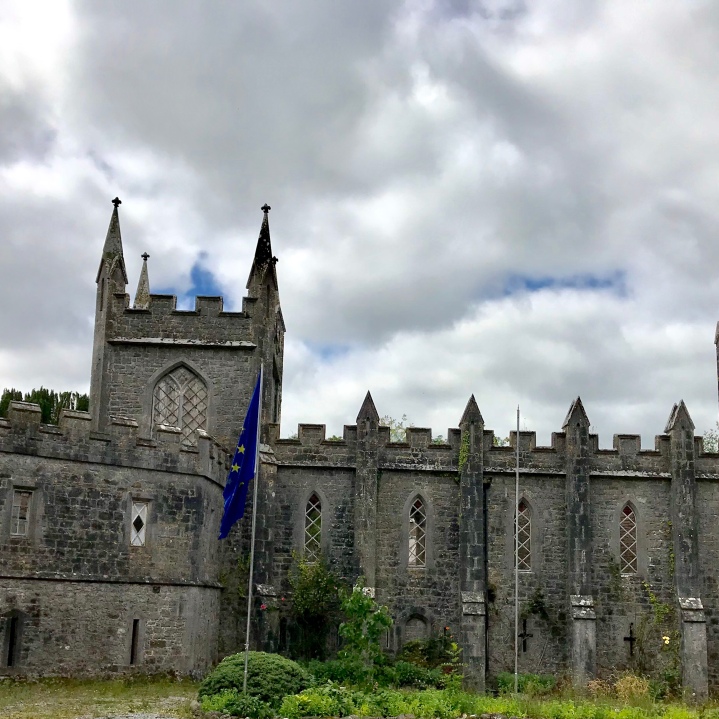 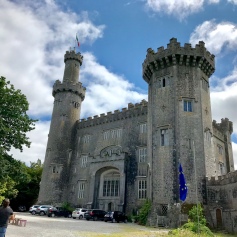 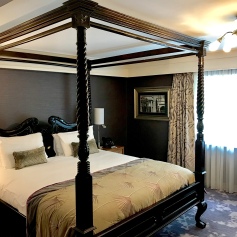 Our room at Clontarf Castle 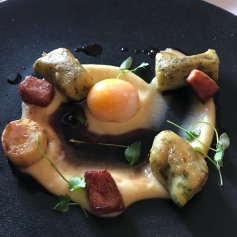 Day 5: We spent the afternoon revisiting some of our favorite places in Dublin, having been many years since our last visit. After a walk about Temple Bar, we had lunch at Gallaghers Boxty House and made a brief stop at The Brazen Head, the oldest pub in Ireland, before departing for Belfast. We found our rental apartment with no problem, which was in a great area of Belfast (very close to city hall). As an added bonus, our flat had a washer/dryer and a Tesco directly across the street. We were looking forward to doing laundry and having a home cooked meal!

The Brazen Head
Day 6: We took an easy drive to the west coast of Northern Ireland to see the Giant’s Causeway. There is a fee to access the visitor’s center, but it’s not required to pay to visit the Causeway. For a parking shortcut, park at the Causeway Hotel and go inside for lunch or a snack. They will validate your parking so not only will you park for free, you won’t have far to walk to the Causeway. We took the walk down the road to get to the Causeway and for £1 each, took the bus back up to the top. The Causeway is a unique attraction and a must visit. Be sure to wear sturdy shoes (I wore ballet flats and was fine) and be prepared to climb around to get the very best views.

After leaving the Causeway, we took a short drive to Dunluce Castle for some breathtaking views of the sea and coastline. With more time, a visit to Bushmills Distillery would have been on the way, but instead we decided to spend our time at the Carrick-a-Rede rope bridge which was a great decision (and would not be wise after a whisky flight!). If you’re driving to the rope bridge, Google maps will direct you to a driveway about .5 mile away from the actual entrance. When you see the signs for the rope bridge, trust them (not Google maps). Once you’ve parked, be sure to buy your tickets for your timed entry; you may have to wait up to an hour to enter. You can also buy your tickets online on their website. Once you enter, you will walk about a mile to the actual bridge. Some of the walk is across stairs (up and down). Those with disabilities will not be able to access the site. Once you’ve crossed the bridge – people with fear of heights may not enjoy this – you can spend some leisurely time on the little island, watching for whales, dolphin and puffins. We were there on a warm, sunny day, and took the opportunity to kick off our shoes and relax for 30-minutes or so before making the hike back to the car. At the parking area there is a small café and toilets. 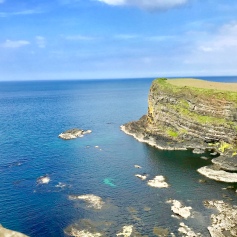 Hiking to the rope bridge 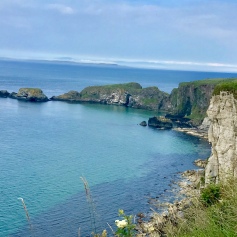 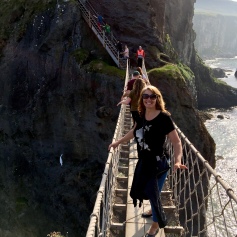 Day 7 & 8: We spent the last two days checking out Belfast’s many attractions. Although not the most beautiful city we’ve visited, what it lacks in quaintness it makes up for in stuff to do. Over the two-day period we visited the Game of Thrones exhibit (check the website for the schedule as the exhibit is temporary), the Titanic Museum and the Crumlin Road Gaol. If you are a GoT fan, you will enjoy seeing actual props and costumes worn during production of the series. Don’t expect to visit the actual sets, however. Although many scenes were filmed at Titanic Studios next door, the sets are closed to the public and tours are not offered. During our visit we were able to spy some of the Kings Landing set over the fence. The Titanic museum was a disappointment. It’s very disorganized, almost no artifacts from the wreckage are on display, and there is a LOT of reading required. The typeface on the displays is so small you have to get very close to read it, which results in a lot of people crowding around the displays, blocking them from view. Some exhibits were hard to access because they were small and people were constantly blocking the entrance. Unless you are a major Titanic buff, this is one I can’t endorse. The Crumlin Road Gaol was fascinating and our favorite thing in Belfast. The guided tour is excellent and the groups are small. The onsite restaurant, Cuffs, has pretty good food for a light lunch or snack.

In addition to the attractions mentioned, we also recommend a visit to the stately City Hall building, visiting the cathedral and the Titanic memorial garden, as well as the Corn Market and checking out some of the historic pubs. There are also lots of tours of The Troubles if you’re interested in learning more about Belfast’s turbulent past.

On our last night we learned that the best restaurant in Belfast was literally next door to our flat – we had a wonderful meal at Kitch, which was a great send off! 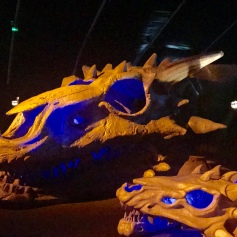 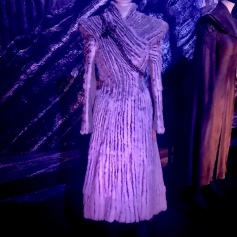 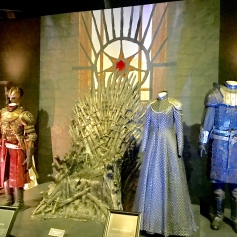 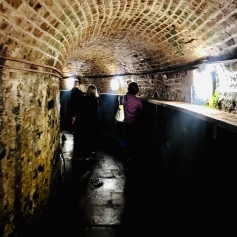 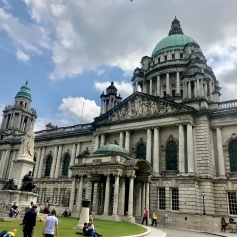 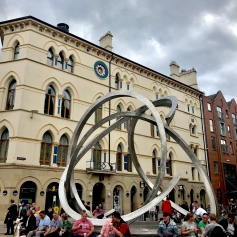 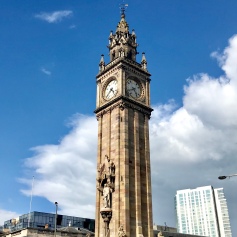 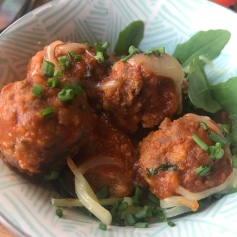 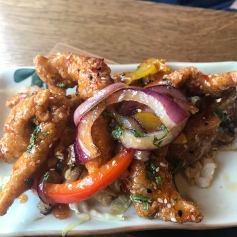 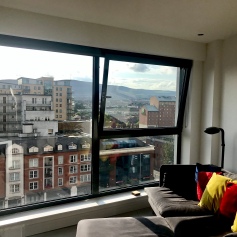 Our flat in Belfast

As we made our way through Ireland we realized that we would have no problem finding things to do over the course of 10-days; if anything, we really needed another day or two to explore some of the stately manors and castles and visit a few more towns. Ireland may not be large, but it is packed with more than enough to do to keep a visitor busy for at least two weeks and then some!